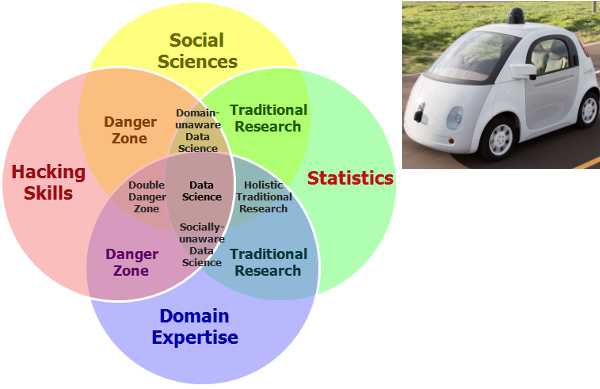 Last year, I blogged about The Fourth Bubble in the Data Science Venn Diagram: Social Sciences, where ignoring the human aspect of data science -- how people consume and interact with products and services and conversely how data science affects people -- leads to misdirected data science that is suboptimal or even possibly harmful.

Today, an article in the New York Times describes some problems Google is having with its self-driving car because of ignoring the human aspect. A lot of machine learning goes into developing a self-driving car, but by ignoring the social interactions between drivers, odd failure modes have arisen in the early prototypes. This is the "Socially-unaware Data Science" region in the above diagram.

The four-bubble diagram has gained some traction elsewhere, though. A veterinary paper has cited my last year's blog post about it.